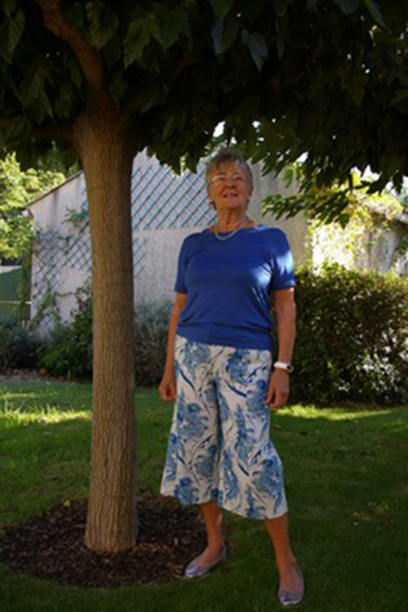 Bernie in the South of France wearing her blue and cream dragon print cotton culottes made using a pattern taken from the Burda magazine no 195, March 2016. She made adjustments (intentionally) and took out the pleat in the front simply by seaming it down.  The culottes were finished by then but felt they were far too wide so rather than disturb the good fit over the hips and waist she just took out the fullness by stitching the pleat down as a seam and then cutting away the surplus, an overall difference of several inches.  Bernie did have to undo the waistband for a few inches on each side to do the job properly.  Then (unintentionally as when using the overlocker to finish these extra seams she got the back caught up in it thus making a hole!) made a similar seam down the centre back of each leg of the culottes, no more than an inch or so of width, and is very pleased with the result. (HOORAH!)

As for to the top, it is made from some lightweight organic cotton jersey and the pattern is an amalgam of several for a far too complicated reason to explain!  Let’s just say it is a t-shirt!